I haven’t written much about EFF’s work on competition, and I’ve been hoping to do so for a while. I noticed the recent fight between HEY and Apple’s App Store, and it’s such a perfect example of where the current system fails innovators and the public. You can also read the full post on EFF’s Deeplinks blog.

Basecamp’s new paid email service, HEY, has been making headlines recently in a very public fight with Apple over their App Store terms of service.

Just as the service was launching, the HEY developers found the new release of the app—which included important security fixes—was held up over a purported violation of the App Store rules. Specifically, Developer Rule 3.1.1, which states that “If you want to unlock features or functionality within your app, (by way of example: subscriptions, in-game currencies, game levels, access to premium content, or unlocking a full version), you must use in-app purchase.” Apple alleged that HEY had violated this rule by pushing users to pay for its email service outside of the crystal prison of the App Store. 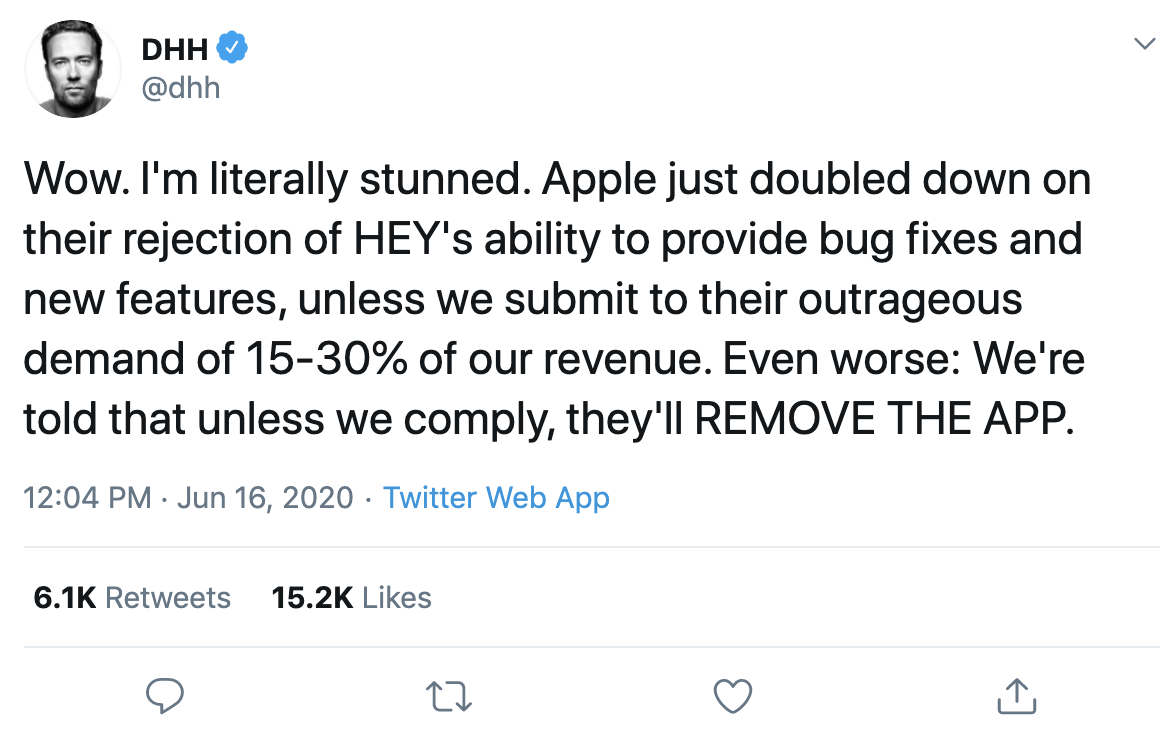 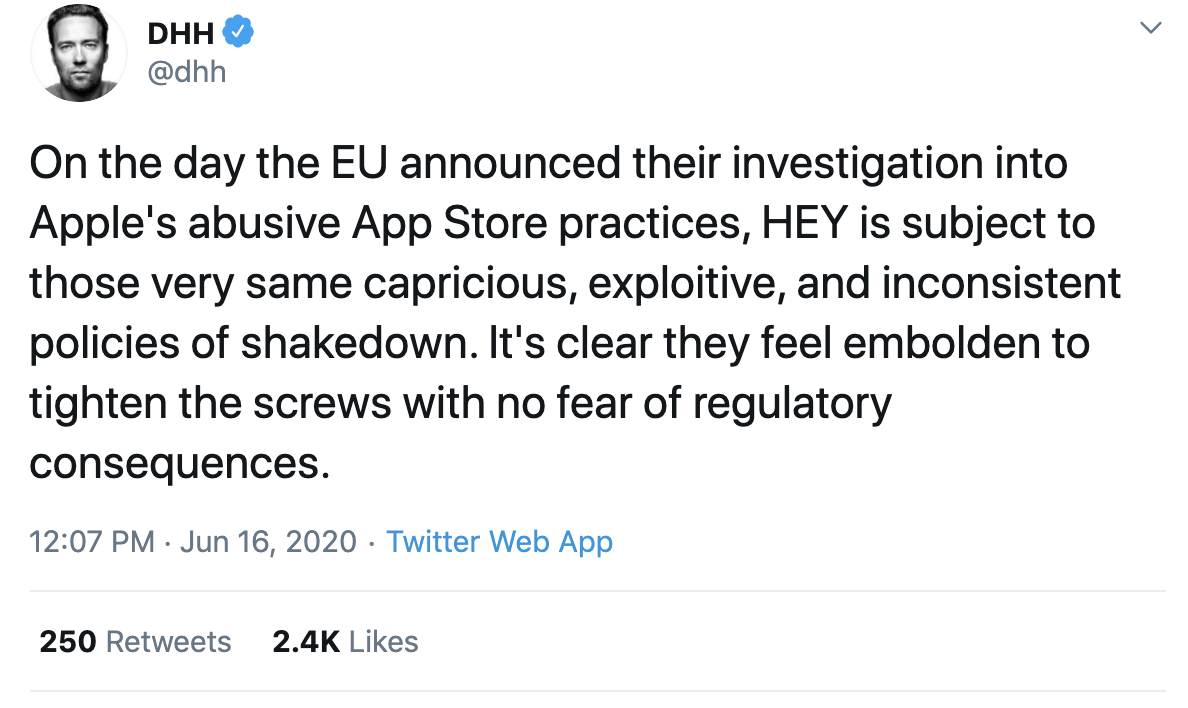 But many apps—like Netflix and Amazon’s Kindle —follow this same payment pathway, with users setting up accounts directly through a website and then logging into that paid account via an app in the Apple App Store. And it’s no wonder that tech companies balk at the idea of following App’s store payment pathway—as the BBC reports, Apple takes a cut of all in-app payments, often as much as 30%.

HEY announced that they had found a way forward: negative publicity and public pressure pushed Apple to keep HEY in the App Store, at least for now. Apple agreed to allow the new version of HEY with its security fixes, and HEY is seeking to release a new version of the app they hope will be more palatable to Apple long-term.

But one-off exceptions don’t address the systemic problems with the App Store, and not every app developer can launch a high-profile publicity campaign to shame Apple into doing the right thing. HEY’s fight with Apple highlights what’s most broken with the App Store: our mobile technology environment is dictated by two tech behemoths that set the rules of innovation for billions of people. And while the current system may benefit Apple, Google, and a small number of early-entrant technology companies, everyday technology users and small startups end up with the short end of the stick.

Apple’s policies are opaque, arbitrarily applied, and byzantine. The company prioritizes their own apps in search results, a Wall Street Journal analysis found, so that users searching for “music, “audiobooks,” or other categories will be shunted toward Apple products. Apple has also restricted and removed apps designed to help families limit the amount of time they spend using Apple products, according to an analysis by the New York Times and Sensor Tower. Apple also has a history of censoring apps in country-specific App Stores, including removing Chinese language podcasts from China’s App Store. More recently, two podcasting apps were removed from China’s App Store. The creators of one of those apps said, “The very small amount of warning we were given between there being a problem, and our app being completely removed from the Chinese app store was quite alarming.”

It’s no wonder that the European Commission has launched an antitrust investigation into the App Store, and United States Representative David Cicilline (D-RI) described the App Store fees as “highway robbery, basically,” that are “crushing small developers who simply can’t survive with those kinds of payments.”

Some may be celebrating HEY’s recent victory in getting the newest version of the app into the App Store, but we aren’t. For every app like HEY that can mount a publicity campaign and carve out an exception for itself, there are untold other app developers who tolerate exorbitant fees or have their apps banned with little notice. Exceptions to Apple’s policies don’t fix the root problems, which is a broken marketplace that is financially incentivized to limit user choices and competition.

What might a real solution to this problem look like? The first step is transparency: Apple should be up-front about its policies and appeals systems, so that developers can act with certainty. Transparency also includes a public accounting of how and why apps are banned from the App Store, released publicly so that scholars, lawmakers and the general public can be informed about how and when tech users are denied innovative products. Second, policies must be fairly applied to all apps in the App Store; companies with big followings like HEY and Netflix shouldn’t get special deals that patch rather than fix the system. Third, Apple needs to commit to allowing updates to apps that are already in the stores that only fix security bugs—we all need to know that our security is Apple’s top priority. Finally, Apple needs to revisit its pricing model and remove the requirement for every app to use Apple’s in-app payments. If app developers can choose whether or not to use Apple’s payment services, that competition will discipline Apple, so that it prices its service at a level that appeals to developers.

Authorities are taking renewed interest in all forms of antimonopoly enforcement and EFF is glad to see these remedies considered for the mobile OS duopoly. Apple’s high-handed and arbitrary treatment of software vendors didn’t occur in a vacuum: rather, it’s the toxic result of growth-through-acquisition, Digital Rights Management restrictions that prevent competing App Stores, and the creation of vertically integrated monopolies—where Apple provides a store to sell apps and then competes with the companies that must use that store. Companies that can use the law to accumulate market power create abusive, dysfunctional systems that limit public choice and stifle competition. And if Apple continues to leverage its total control over the software that runs on Apple devices to extract arbitrary tolls and impose censorship on developers, antitrust authorities have the power to order Apple to allow competing App Stores.

Walled gardens don’t have customers, they have hostages, and evenhandedness is the very least we should demand of those who take away our choice. Apple doesn’t have the best App Store for iOS users, it has the only one. Far better would be competing App Stores with their own policies, where software authors and their customers get to decide for ourselves who’s earned our trust.

Hiking the PCT 2022. Lover of backpacking, novels, long runs, listening to the rain, movies with sword fights, meditation, and cozy socks. View all posts by Rain

Welcome! I’m so glad you’re taking the time to visit.

This blog is a patchwork of different issues I find interesting: from data privacy and human rights to backpacking to prison reform to organizational development.

You can also fine me on Twitter and LinkedIn.

Looking for my nonprofit management work? Check out Groundwork Consulting.